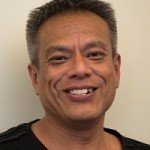 Vincent Crisostomo, a gay Chamorro activist, was born in 1961 in Tachikawa, Japan and is a native of Guam. Having lived in Guam, LA and New York, Vincent primarily considers San Francisco to be his home community. In 1991, Vincent and his partner Jesse were of the first fifty couples to register as domestic partners in San Francisco when same-sex marriage was briefly legalized. Jesse passed away that same year due to AIDS-related complications, which spurred Vincent to become involved and active with his community.

Vincent has been living with HIV since 1987 and became the first person to be publicly out as living with HIV in the Pacific Islands when he came out on World AIDS Day 1992 in Guam. Vincent has worked with the Asian AIDS Project, the Gay Asian Pacific Alliance (GAPA) Community HIV Project, the Living Well Project, and the API Wellness Center. In 2000, he returned to Guam to become the Executive Director of the Coral Life Foundation, which was the first community-based organization that was funded to do AIDS work in the Pacific. During that time, he quadrupled the budget for AIDS to $800,000. Today, Vincent continues to work on HIV/AIDS in the Bay Area.

Recently one of the pillars of the community passed away, and I went to his memorial service, and I was like, oh my god, I’ve got four exes here, I’ve got numerous people that I’ve slept with, and I was just thinking, god, it made me really proud to be a part—to have a community.

She disowned me after I told her I was gay. I never even told her I had HIV. So she comes and I think, oh god, this is going to be.. I’m going to have to kick her out, she’s going to make a scene, it’s going to be horrible. She just comes in and she looks at him and makes the sign of the cross… and she says, you love him, don’t you?

This is an example widget to show how the Right Sidebar looks by default. You can add custom widgets from the widgets screen in the admin. If custom widgets is added than this will be replaced by those widgets.