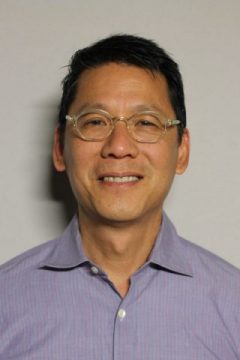 Steve Lew is a LGBTQ activist and 5th generation Chinese American born in Watsonville, California. He was first politicized as a teenager when he joined a Marxist study group and met older Asian activists who organized around the International Hotel and Ethnic Studies. Steve moved to LA and worked with a Marxist group for 10 years. He moved back to San Francisco to be more in touch with the API queer community. Steve eventually co-founded the Gay Asian Pacific Alliance (GAPA) community HIV project and became an HIV prevention worker. The organization grew into a national service organization, was renamed the Living Well project, and eventually merged with the Asian AIDS project to become the Asian and Pacific Islander Wellness Center in 1997 (wiki). He brought his HIV activism to the national level when he served on the HIV council for President Clinton in the early 2000s. Steve worked with other gay men of color on the council to create dialogue on stigma, racism and homophobia in the AIDS field, the gay community, and communities of color. He has been living with HIV for over 25 years. He has also served as board member for many community organizations such as Project Inform and Grassroots Institute on Fundraising Training (DFP, 16). Steve is currently Senior Project Director for CompassPoint Nonprofit Services in Oakland, California (Wiki).

…So, it was hard, it felt a lot of challenge to try and really bring together all my identities and things and really feel like I was living in a very holistic way in that period of time.

It’s really exciting to be able to know that we don’t have to necessarily have, say that we’re a queer organization and that we’re queer. There’s groups that are Asian Pacific Islander queer that are much more explicit of having a social justice mission. So all those things are really wonderful evolutions, I think, to know that’s where people can embrace all their identities together.

This is an example widget to show how the Right Sidebar looks by default. You can add custom widgets from the widgets screen in the admin. If custom widgets is added than this will be replaced by those widgets.